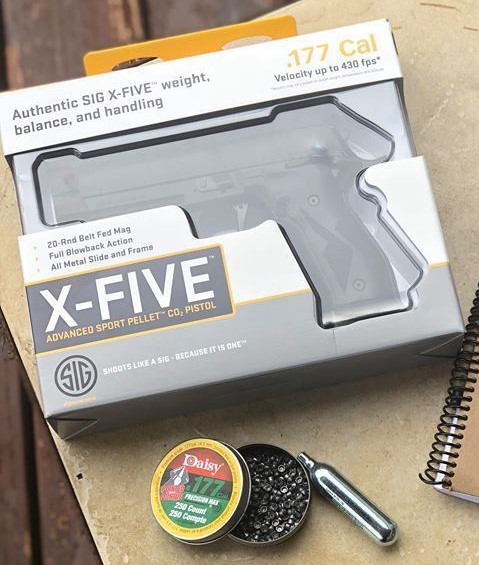 On the SIG X-Five air pistol packaging it says it, “Shoots like a SIG because it is one.”  The remark on the packaging is accurate.

The SIG X-Five air pistol is an excellent choice for learning, reducing the expenses of shooting, solving the problem of not having a location to shoot, or just for plain good old fun.

Often new shooters and even experienced shooters struggle with anticipation of recoil and the result is low and left (for the right-handed shooter) or high and left if they are a “pusher.”

One of the solutions to the problem of anticipating the shot is dry fire practice or ball and dummy drills.  The repeated shots with little recoil on a air pistol such as the SIG X-Five is another great option.  The fundamental movements on the X-Five pistol are the same as its big brother “real” pistol with the exception of felt recoil, distance of travel on the slide, and the limitations of where you can shoot it. 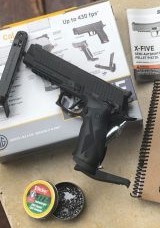 I’m pretty blessed to have a pistol and rifle range in my backyard but that’s not the norm.  The X-Five air pistol would be perfect for you poor folks that live in an urban environment.  It would be incredibly easy to take a cardboard box, layer an extra floor to the box, hang a target on the open end, and shoot away at distances as close as a yard and as far away as about 15 yards.  The pellets exit the barrel at speeds of up to 430 fps as opposed to an average 9mm bullet which travels at about 1200-1300 feet per second.

The SIG X-Five shoots .177 pellets with the help of a no tools required to load 12gr CO2 housing.  The pellets easily load, 20 rounds at a time, in a removable magazine that allows the user to maintain the same order of operations and feel of loading and unloading a real magazine.

When you pick up the SIG X-Five it feels like the real deal.  The balance and weight are accurate with an all metal frame and slide.  It even has a picatinny rail allowing you to use tools like the MantisX on it or installing the same light you might have on its big brother, so it works in your retention holster etc.  Be careful where you have this and treat it like a real firearm.  Never point the pistol at anything you’re not willing to destroy and keep your finger off the trigger until your sights are aligned and you’re ready to fire.

The ambidextrous thumb lever safety functions the same as you would find on a regular SIG.  I found it to be a little difficult to work at first, but it quickly broke in and started working as you would expect.

If you’re looking for alternatives to having a centerfire pistol in the home, an option for practicing inside the home, or just like shooting an air pistol then you are going to enjoy the SIG X-Five Advanced Sport Pellet CO2 pistol.  I found it to be surprisingly fun, accurate, and realistic it form, fit, and function.

There are only two things you must do to hit a target. Align the barrel and pull 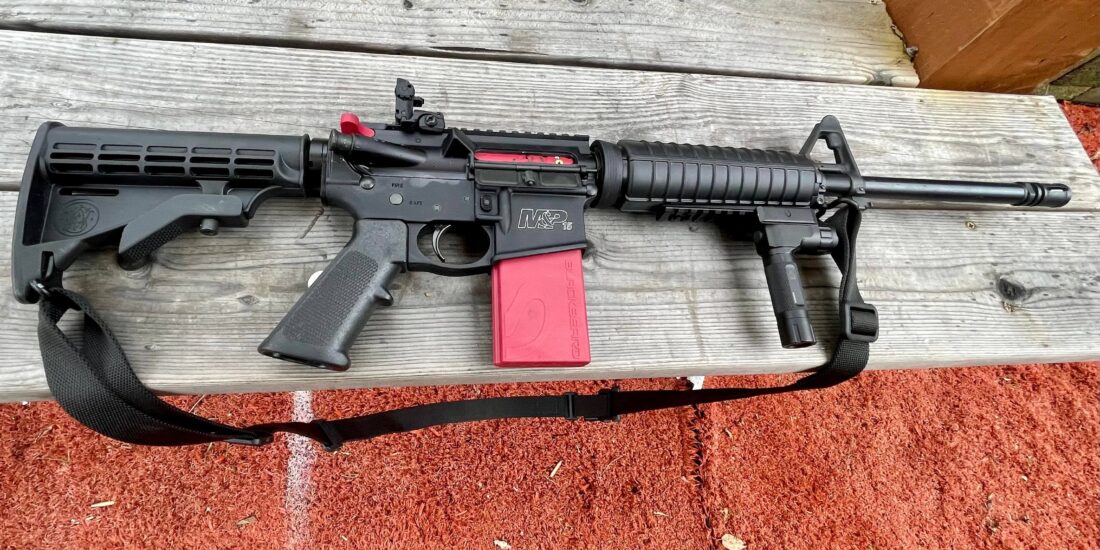