Home  /  Firearms   /  Ammunition   /  The 458 SOCOM: Steinel Ammunition takes it From the Battlefield to Elk Country
Ammunition

The 458 SOCOM: Steinel Ammunition takes it From the Battlefield to Elk Country 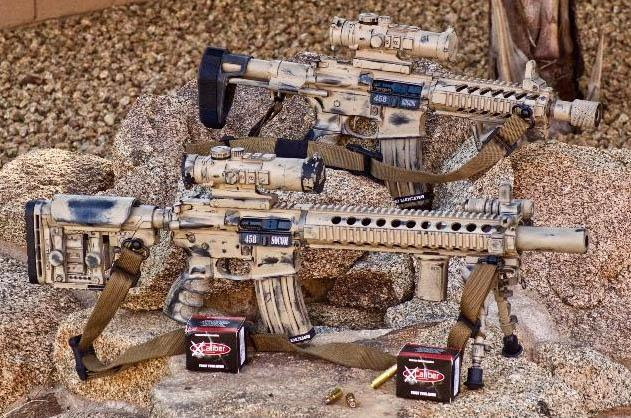 With hunting season underway across the country, an increasing number of AR-15 platforms are being used in the field. Modular, accurate and durable are attributes that make the AR-15 platform or Modern Sporting Rifle (MSR) such a popular choice. In fact, the National Shooting Sports Foundation (NSSF) estimates approximately 5 to 10 million MSRs are owned by responsible citizens. The platform, initially developed by Armalite in the 1950’s as a military-style rifle, has become increasingly popular with civilians for home defense, varmint hunting and more recently big game hunting. 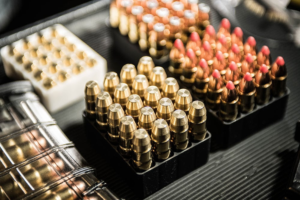 While the original .223 cartridge was effective for small game and varmints, deer hunters found the cartridge lacking in knock-down power. The pursuit was on for a reliable projectile that could take larger game ethically and fit and feed the MSR platform consistently. A slew of larger calibers from 6.5 Grendel, 6.8 Remington, 300 AAC Blackout to name a few, became standard offerings. Hunters found these calibers were effective against mid-sized large game such as deer, hogs and black bear. Bone crusher calibers would quickly follow providing high country hunters with the power to knock down large American game such as elk, moose and brown bear. But one of these calibers did not get its start as a hunting caliber, at least of the four-legged variety.

The legend of the founding of the 458 SOCOM round does not begin in a large ammo company’s R&D, but at a barbeque. The Battle of Mogadishu was the tipping point during a two-day battle between US Forces and Somali militiamen under Mohamed Farrah Aidid, the self-proclaimed president-to-be. The US Forces were comprised of the elite special forces from the US Army Special Operations Command, Air Force Special Operations Command and the US Naval Special Warfare Command, collaborating as Task Force Ranger. The goal was to capture two of Aidid’s top lieutenants and the time frame for the mission was estimated to be about an hour and ended up lasting overnight and well into the next day with 18 elite American troops killed. The 2001 Ridley Scott movie Black Hawk Down, a film based on the novel by Mark Bowden about the 1993 raid in Mogadishu, brought home the enormity and horror of modern warfare to the American public. One of the many issues our US Forces commanders realized was that the current military round, the 5.56×45 cartridge, did not have effective stopping power on enemy troops, especially enemy troops hopped up on the local drug Khat, an herbal stimulant that causes loss of appetite, excitement and the inability to feel and register pain.

Back to that barbeque. Marty ter Weeme, founder of Teppo Jutsu, a small, custom ammunition design and firearms company in Texas, was chatting with a senior member of the US special operations community while have a few beers and some good down-home Texas BBQ. Marty set forth from that stuff-of-legends meeting to develop the 458 SOCOM based upon the Special Operations Command requirements. The 458 SOCOM cartridge was required to fit the M4 carbine and fire at subsonic velocities using suppressors. Marty developed the cartridge and Tony Rumore of Tromix built the first 458 SOCOM rifle in 2001.

Less than 20 years later, a new ammunition design and manufacturing company, founded by Andy Steinel, was making the gun show rounds selling his unique MILSurp, big bore and hard-to-find calibers. A contact made at a local gun show in Ohio led the fledgling Steinel Ammunition Company to its first distributor, specifically of this military-style round.

But the 458 SOCOM would find its place far from the battlefield as a preferred large game caliber that hits hard and ethically drops bigger game at short to mid ranges. Steinel Ammunition was on the forefront of bringing quality ammunition in this new caliber to the hunting community. Initially, hunters who had been intrigued and enthusiastic about this round, found it scarce in the marketplace, and if found, expensive. The 458 SOCOM was a hand loaded specialty- that is until Steinel Ammunition began offering accurate loads with a 300gr JHP and a 325gr FTX in 2016 and at prices that made hand loading much less beneficial.

“Our SOCOM customers come back for our accurate, reliable rounds that feature great bullets, across multiple hunting applications,” Andy Steinel, president of Steinel Ammunition said. “The 300 grain JHP works for most everyone, but for those that prefer exceptional accuracy we offer the 325 grain FTX, and for those who demand unmatched penetration we have our 325-grain solid brass RNFP. For those looking for optimal expansion, we offer a 250 grain Solid Copper Hollow Point (SCHP). Even though we currently offer 4 different loads, we are still expanding our 458 SOCOM offerings to meet the discerning broad needs of our customers. We are currently looking at some of the bullet technologies offered by Lehigh Defense.”

“Researching the origin of the 458-ammo inspired me to build the rifle,” T_Gun’s review states. “I tried numerous brands of ammo. The quality, price and service from Steinel Ammo stands out so much that I had to build a matching pistol. The ammo runs flawless through both firearms. No doubt the best 458 SOCOM ammo on the market!”

Whitetail hunters prefer the 300 gr. JHP because of its consistency round after round. One of Steinel’s converts previously found that using traditional hunting rounds such as .30-06 or .308 left him tracking wounded deer since the round would not fully expand and pass right through the deer. His son talked him into using 458 SOCOM in an AR platform and after finding out about Steinel’s 458 SOCOM 300 gr. JHP, he was shooting 3-round groups at sub-MOA at 100 yards. He took a 175 lbs. deer with a non-typical rack at under 110 yards and “the shock power of the round knocked down the deer and it did not suffer.”

For hunters who prefer the MSR platform and want a bone crushing projectile that takes game quickly and effectively at short to mid-ranges, the 458 SOCOM is a preferred caliber. Since the round fits in standard 5.56 magazines, it makes for an easy transition moving from one species to another in the same platform. While not legal in states requiring straight-wall only cartridges, the 458 SOCOM offers the advantage of a hard-hitting 45 caliber rifle in the AR-15 platform.

Steinel Ammunition Co. is a premium manufacturer of self-defense, hunting, and target ammunition. While other manufacturers may have a specific product line designated as “match” or “premium,” at Steinel—premium ammunition is all we do.

When you use Steinel pistol or rifle ammo, you can be sure that countless hours of research and testing have gone into every round. Each recipe, component, and assembly are designed to provide you with optimal performance.

Our passion for precision, repeatability, accuracy, and reliability drives our pursuit of perfection. Let our attention to every technical detail provide you with the ammunition you and your gun deserve.

We stand by our products 100 percent with a Satisfaction Guarantee policy. 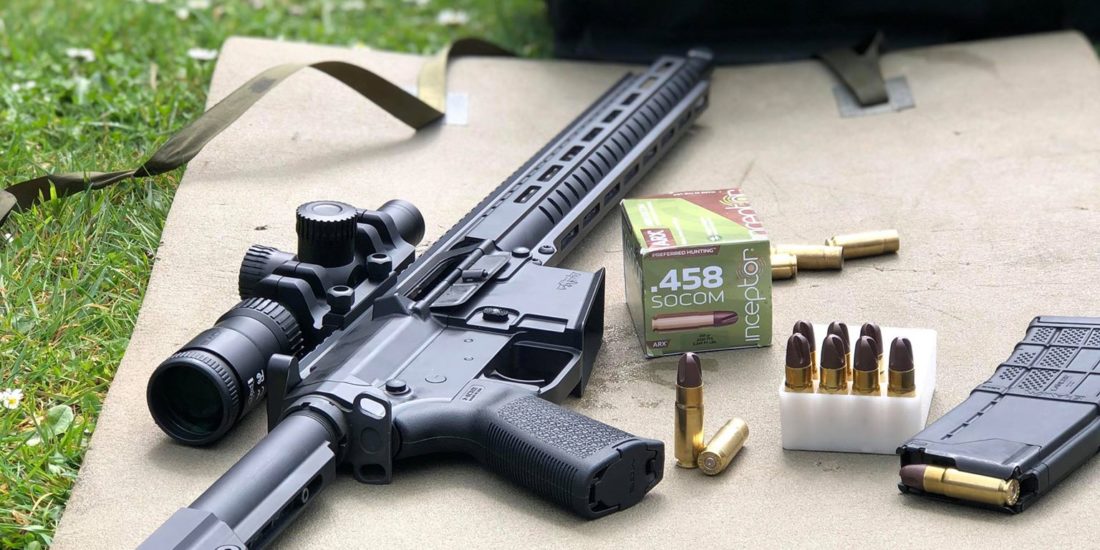 A Big Heavy Round CMMG Inc, of  Boonville, MO, USA has created a thumper that is fun to 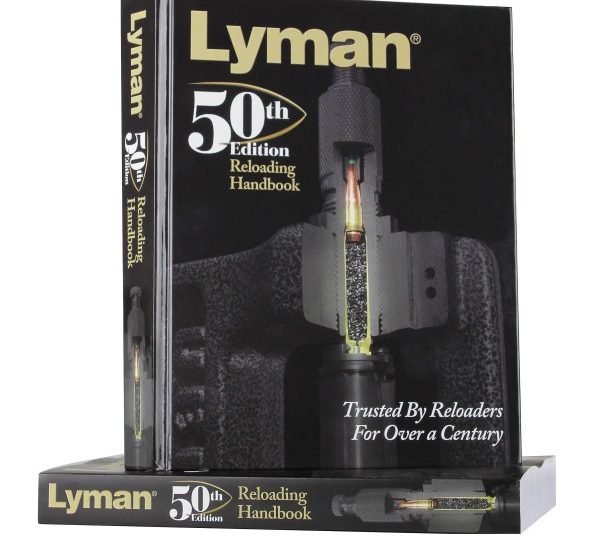 Ammo Bans Got You Down? Start Reloading with Lyman’s 50th Edition Reloading Handbook

With several states placing restrictions on ammo purchases and other states considering, more shooters are turning to