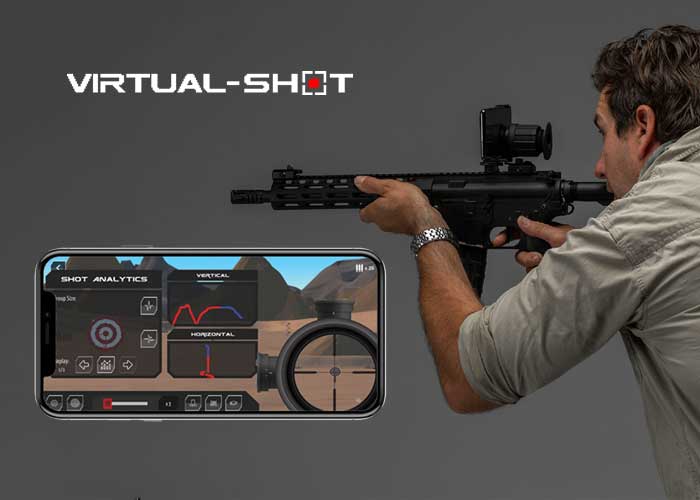 Virtual-Shot is a dry fire training system that turns your phone into a portable shooting range when attached to any real rifle, AirSoft rifle or GelBlaster. Featuring real world ballistics and arcade style games it is perfect for any double action trigger or dry fire system such as the dry fire mag, Mantis Blackbeard or Coolfire Trainer that resets the trigger.

I have used a dozen different high-tech training systems as a soldier and a cop. Even though they sometimes filled rooms and cost many thousands of dollars, the Virtual-Shot is right there with them in quality of simulation for $97. The app is simple to use and easy to set up. Using Bluetooth headphones provides a biaural feel of being at the range.

My favorite way of using Virtual-Shot is with AirSoft. The trigger resets and there is the safety of a training system which cannot fire live ammunition. I block the spring in my magazine so the follower does not block the bolt and cannot fed BBs. It is not live fire recoil, but it is fun.

Built by a team of military veterans, the Virtual-Shot app includes:

– Professional video shooting lessons: learn the techniques the military has refined over hundreds of years to train soldiers to shoot

– Totally customizable range: Where you control target distance, wind speed and direction and even have the ability to practice shooting at moving targets.

– Mini Games with leaderboards so you can finally decide if you are a better shot than you buddies while shooting Zombies, hunting deer, neutralizing insurgents and shooting bottles and steel targets at the range.

The tracking software is processor heavy so you will need a modern smartphone manufactured from 2019 onward.  For iPhones you will need an iPhone6s or later. For Android the best way to check is to visit the Google Play store link here.  If you can download the app your phone is compatible. The Picatinny Phone mount will hold phones with a width no narrower than 61mm and no wider than 77mm so you might have to remove bulky phone cases. The Pistol Mount will cater for all phone sizes. 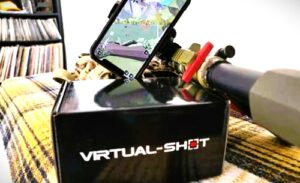 Among the best and cheapest dry fire systems, Virtual-Shot uses your phone to create a virtual range environment. The analytics are perfect for learning fundamental skills. 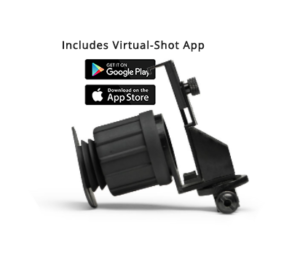 Virtual-Shot uses both the phones sensors and microphone to detect the dry fire sound of real guns, air guns, airsoft, paintball and gel blasters.  The sound detection algorithm will detect pretty much anything that makes a click sound when dry firing.

Virtual-Shot will enable you to practice with real bullet drop and wind effects at all distances.
Fully customizable ranges where you control the target type, distance, movement and even wind conditions.
100+ levels, ranges and mini games with everything from hunting deer, IPSC style gallery shoots, steel challenge levels, junkyard challenges, zombies and even insurgent combat levels.
In app video shooting course taught by a veteran Sniper so you can take your shooting to the next level from the comfort of your own home.
Advanced shooting analytics that enable you to review barrel movement before and after shots to perfect your breathing trigger manipulation and shot release.
Professional built in shot timer so you can break down your shooting and work on improving split times between shots.

With Virtual-Shot’s 30-DAY UNCONDITIONAL MONEY-BACK GUARANTEE you can try it 100% Risk-Free. If you don’t love Virtual-Shot…for any reason…just let them know with-in 30 days and they’ll send you a full refund.

I am still learning all the Virtual-Shot features but I am very happy so far. Virtual-Shot pushes dry fire exercises to the next level.  Games make it fun and the ballistics calculator makes it far superior to lasers. It won’t replace live fire, but this will keep you fresh between range trips.

The Idea for Virtual-Shot started back in 2010 when one of the founding members was serving as an Infantry Officer in the Australian Army. He  had just been appointed as a Mentoring Team Commander tasked to deploy to Afghanistan. He had 4 months to prepare his team for a 9 month deployment to an isolated patrol base in Uruzgan province Afghanistan where they would patrol with, mentor and train the Afghanistan Army.

Reporting received during lead up training indicated that engagements with Taliban fighters were sometimes at close range, but we’re mainly between 300-800 meters, and were usually ‘shoot and scoot’ tactics (which means firing a few shots at long distance before withdrawing to avoid close contact). To prepare for this, the he wanted to improve his soldier’s marksmanship skills with rapid target acquisition drills to increase first round hit probability at distance.

This was difficult due to limited ammunition and range access to perfect their skills. They made best use of the simulation facilities on the Army base, however getting access to these facilities was also difficult, because the simulation center could only accommodate 10 soldiers at a time and on a base of 5000 people it was almost always booked out months in advance.

At the time, the founding member thought they needed an individual shooting simulation to enable constant and repetitive marksmanship training…. however the laser based shooting systems that were available were not sufficient, and they needed something else… something that they did not have.

Fast forward 5 years, the founding member had returned from Afghanistan, left the Army and made a career change into software development. He soon learned that the technology to create a personal shooting simulation system, the kind that he had wanted for his soldiers, was feasible with the advances in mobile technology, so he started a company with some friends and set about building it…

There are only two things you must do to hit a target. Align the barrel and pull